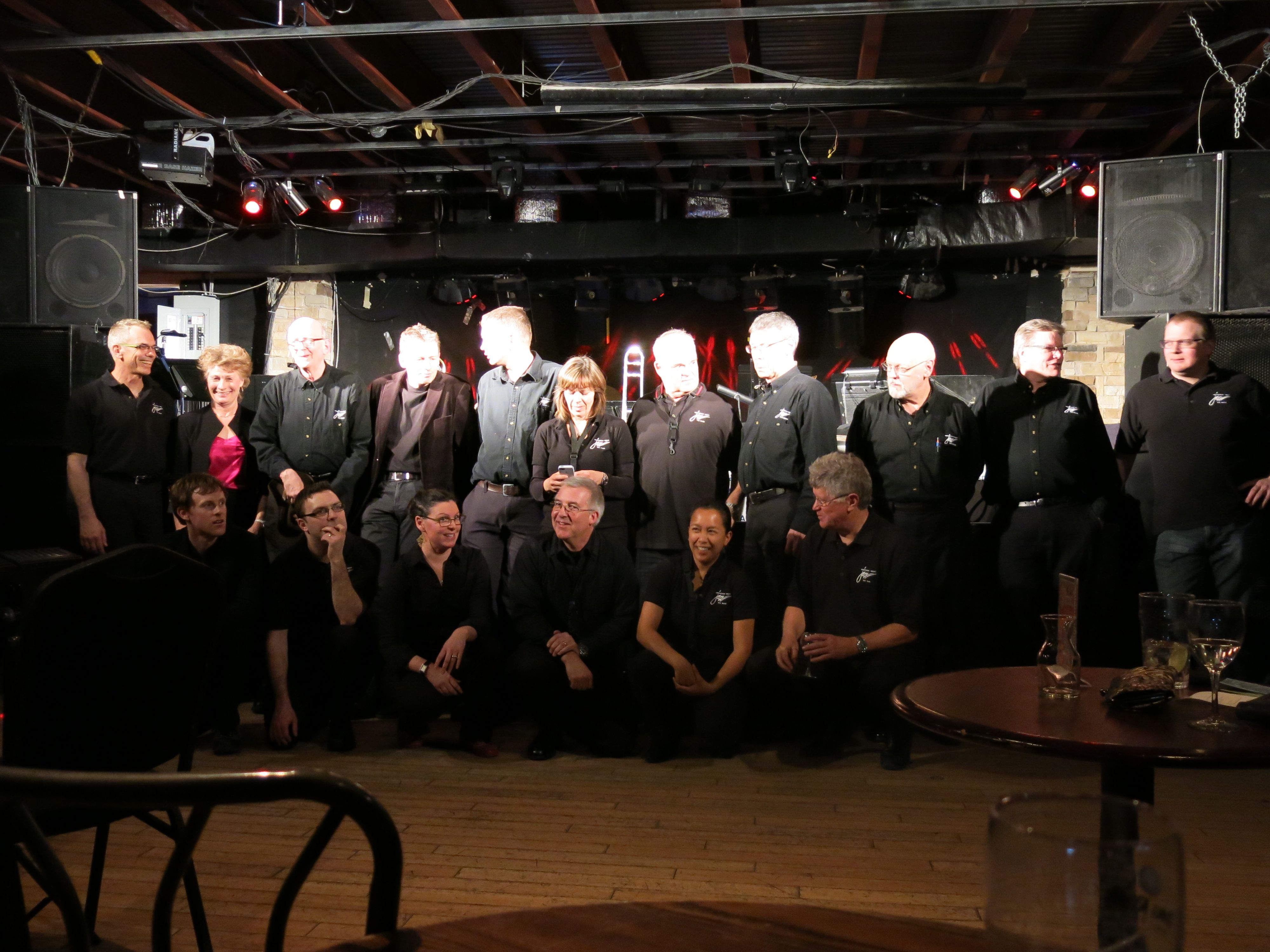 Karen Heaton — Alto — An athlete and dog lover, with some health-care related lab day-job that we don’t really understand. First met Thorlacius when she was 14 years old. When she was four she called attention to her shoes during a recital.

Karl Lingwood — Tenor — Also plays banjo but knowing the problem is the first step. Day job was flying people around now gets paid to pretend to do so.

Lisa Roberts — Baritone — Teacher. Half of the only couple in the band. When she’s not teaching or playing she’s cycling while looking after little ones.

John Towell — Lead — Nearly an original member of the band, cycled through many other bands on other nights but stuck with us through it all. Recently moved to be closer to rehearsals. Day job: land man. Skier.

John Abraham — 2nd — Has a secret love for ska, and founded Delirium ska.punk.brass. Plays simcity for real as a day job. Skis a lot. Ask Thorlacius to tell stories about him from high school.

Jacqueline Abbott — 3rd — From PEI via Vancouver etc. Hillhurst chic. Training her offspring to sub for her.

Dave Prentice — Lead — Not much is known about our Lead Trumpet player Dave Prentice. Other than the faint whiff of meatballs while he arrives at the rehearsal room, and that at least two of his kids are called Louder and Higher. Answers on a postcard please ...

Jon Mossing — 2nd — What to say about Jon? If you’ve heard his solos you’re probably also at a loss for words. Day job: Actuary.

Trevor Roberts — 3rd — Other half of the only couple in the band. Some sort of techy engineery day job. Brings Thad Jonesish charts with lots of notes to rehearsals.

Alex Netelenbos — Bass — One of the longest serving members of the band. Day jobs over the decades have included owning a coffee shop, a framing place, and burning CDs for musicians.

Ron Wrigley — Piano — Has played with many bands but recently settled with us. Occasionally hangs out at Koi open mic. Doesn’t know any funny stories about himself.

Bryan Niblock — Drums — An impressive knowledge of all things drums. Sells implants as a day job. Has a wine collection with more than a dozen bottles.

Brian Chellas — Guitar — Another long serving member of the band. Retired from his day job as a philosophy professor one year, and within two years became seriously good. Camera shy.

Mari Jo de Waal — Fan of jazz and the Great American Songbook from an early age. Partied with the band even before she decided to seriously perform jazz.